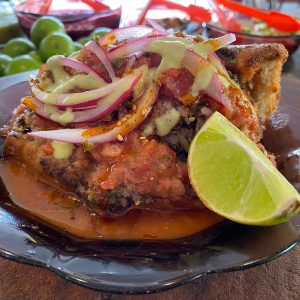 El Puerco de Oro is the latest concept from Chef Joel Ornelas, considered one of the most promising young chefs of Puerto Vallarta. He is no stranger to the restaurant biz, as he is the owner of two other restaurants that I love, La Leña and Tintoque.

Joel is originally from Puerto Vallarta, where he started his cooking career as an apprentice at local favorites Le Bistro and Café des Artistes. He then studied gastronomy and worked at restaurants in Guadalajara before going to Europe for 3 years to gather some experience working at Michelin-starred restaurants and then returning to Puerto Vallarta to open his restaurants.

El Puerco de Oro opened in August of 2020 in Versalles. The sign outside says “Desde el Tiempo de Covid” (since the time of Covid). Their specialty is pork belly tacos, tortas and quesadillas. They don’t serve anything else. They have their menu painted on the outside of the building. It only lists these items.

The tacos and quesadillas are a little bit fancy because they use only blue corn tortillas. The pork belly is cooked to perfection with a crispy golden crunchy crust on the outside, juicy on the inside. It’s the most heavenly pork belly you’ve ever tasted in your life! They have a bright pink neon sign inside the restaurant that reads “no son carnitas” (they’re not carnitas), which is a reference to the higher-end, specialty nature of pork belly.

The tacos come with chopped cabbage, onion and cilantro, and the restaurant serves all the typical sides that you expect at a taco place – guacamole, red, green and habanero salsas, cucumbers and radishes, and of course, limes.

It’s a small place with just 4 tables. It seems to be lesser-known, probably because it’s so new, but already popular with locals. As one friend put it, “Puerco de Oro is my new addiction!”

This restaurant is a classic example of doing one thing and doing it well. Simple but delicious. Anthony Bourdain would be proud.